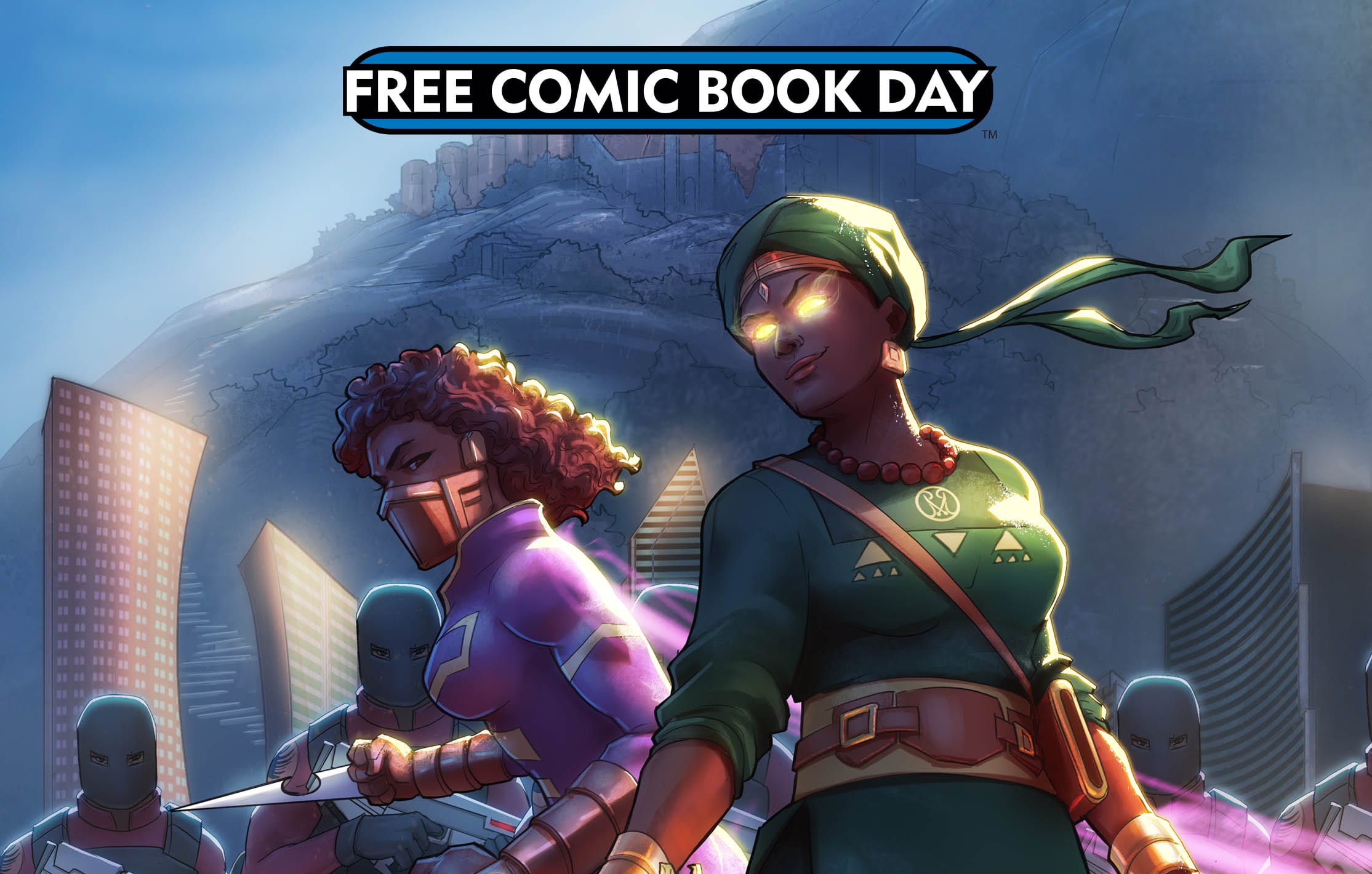 YouNeek Studios, the Maryland based graphic novel and animation company, has announced today that their hit graphic novel series, Malika, will be part of Diamond Comic Distributors Free Comic Book Day this coming May! This time, as a One-Shot titled: Malika – CREED & Fury. 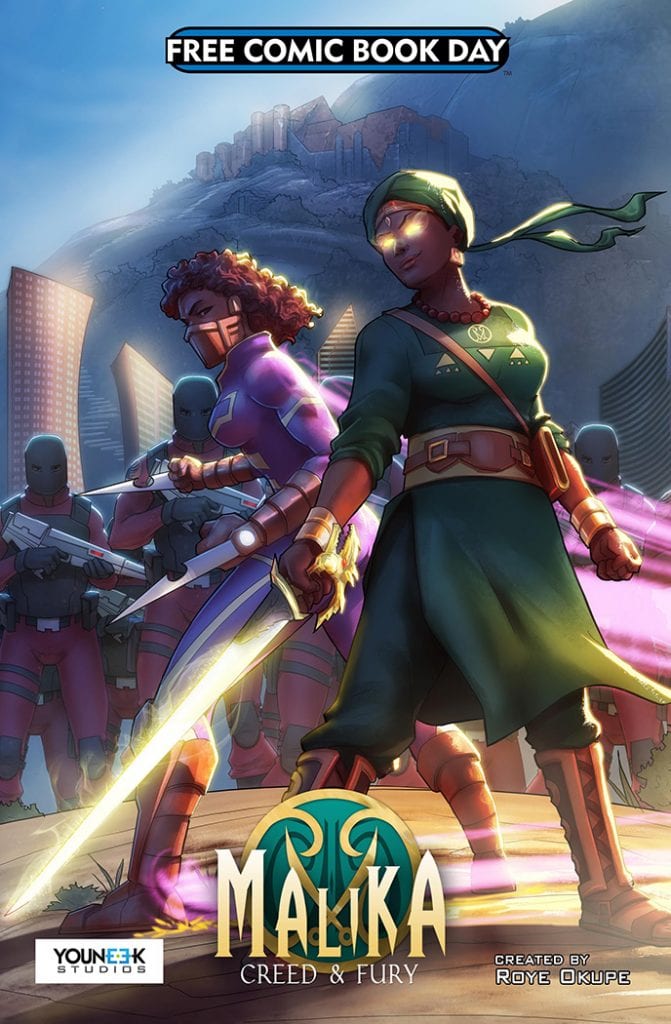 After making history by appearing in last year’s FCBD event (with fans scrambling to grab copies as they ran out at quickly at several comic shops), Malika promises to be a fan favorite once again.

“While E.X.O. remains our flagship title, it is clear that Malika is quickly becoming a fan favorite not just amongst YouNeek fans, but comic book and fantasy fans in general. The Malika series is one that’s very dear to my heart because while it’s an epic fantasy story, it pulls a lot from African history. To be able to write a compelling story that not only entertains people but educates them about where I’m from is a huge blessing. ” – Roye Okupe, Writer/Creator of Malika 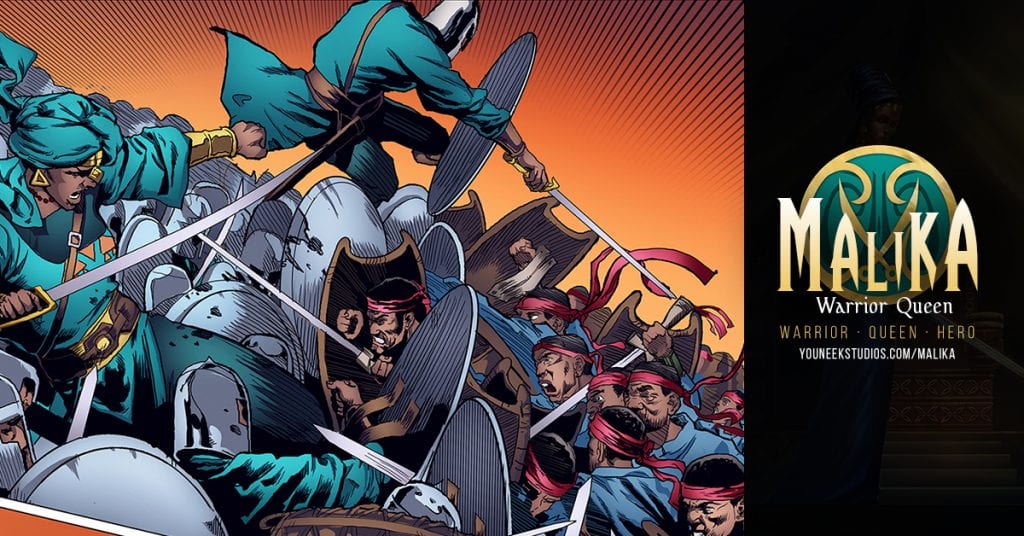 Want to know more about the Malika series? You can grab the Malika – Warrior Queen graphic novel here (on sale today)

With the Malika – CREED & Fury one shot, fans who visit their comic book shops to grab free comics during FCBD are in for a treat! Not only does this one-shot embody the epic fantasy fans have become accustomed to with Malika, but they also get to see her paired with another one of our amazing female superheroes, Fury. Seeing them both on the cover of the book should be enough to spark intrigue. You definitely don’t want to pass on this one. Here’s what Book Riot had to say about Malika from FCBD 2017.

“…None of the independent books really caught my eye until I noticed Malika… We need to bring attention to those, like Okupe, who are doing it right and support them in their endeavors to show those with the will to look, how massive and incredible and diverse the world is.”

Following a 500-year absence, Malika mysteriously appears and is on the brink of yet another war. And this time, she has enemies she cannot predict, allies she refuses to trust and a world she cannot understand. The enemy is the CREED, a growing domestic terrorist group responsible for a devastating attack on Malika’s former home. The ally is Fury, a masked speedster who knows more about Malika than she’s comfortable with. And the world is 2024 Abuja, Nigeria. Removed 500 years from the time she remembers, can Malika find the courage to use her newfound power to save the descendants of her former people? Or will she allow her rage to consume and transform her into something else?

Want to know more about the YouNeek YouNiverse? You can grab any of our graphic novels here

Born in Lagos, Nigeria, Roye Okupe is a creative specialist who holds both a Bachelor’s and Masters in computer science from The George Washington University. His passion for animation led him to found YouNeek Studios in 2012, an avenue that would allow him to pursue his dream of creating a diverse library of superheroes. Under that umbrella, Roye wrote, produced and directed several animated productions including, but not limited to, 2D/3D animated short films, TV commercials, show openers, music videos and much more. These productions have allowed Roye to attain many prestigious recognitions such as being #5 on Ventures Africa’s list of 40 African innovators to watch (2016) as well as being part of NewAfrican Magazines’ 100 most influential Africans two years in a row (2016 & 2017)

With the superhero genre currently at the height of popularity, Roye has made it a goal to create a connected universe of heroes, with origins from locations that are currently neglected and/or ignored. In August 2015, Roye released his debut graphic novel titled: E.X.O. The Legend of Wale Williams Part One, a superhero story set in a futuristic Nigeria. E.X.O. was received with critical acclaim and has since been featured on CNN, Forbes, The New York Times, NBC, The Guardian, ABC7, BBC, The Huffington Post, Mashabe and more! Roye’s sophomore graphic novel: Malika – Warrior Queen was also received with critical acclaim. Both books have gone on to win several awards including a Glyph Comic Award (2017) and a Heruica Character Creation Award (2017).

YouNeek One-Shots are short, self-contained stories that tie into the overall plot of the YouNeek YouNiverse. They will be developed as 24-36 page comics as opposed to the 100+ page graphic novels YouNeek Studios is known for. YouNeek One-Shots are designed to provide more backstory on characters and plot points that are part of the main, on-going graphic novel series.

Free Comic Book Day is an annual event founded on the belief that for every person out there, there’s a comic book that they’ll love. Every first Saturday in May, the industry comes together to give away free comics and encourage fans, both old and new, to flock to the best place in the comic book community: local comic shops. These are the hubs of our community, where fans can come together and discover new comics, make lifelong friends, and find a sense of commonality.

YouNeek Studios is a hub for “YouNeek” and creative character-based storytelling and entertainment. Through the use of animation, digital comics (as well as print), graphic novels, film and other popular media, we aim to build a library of eclectic characters that appeal to a broad audience. Simply put, we focus on telling extraordinary stories about extraordinary characters.

You can read over 100+ pages of YouNeek Studios’ graphic novels for FREE by following this link!