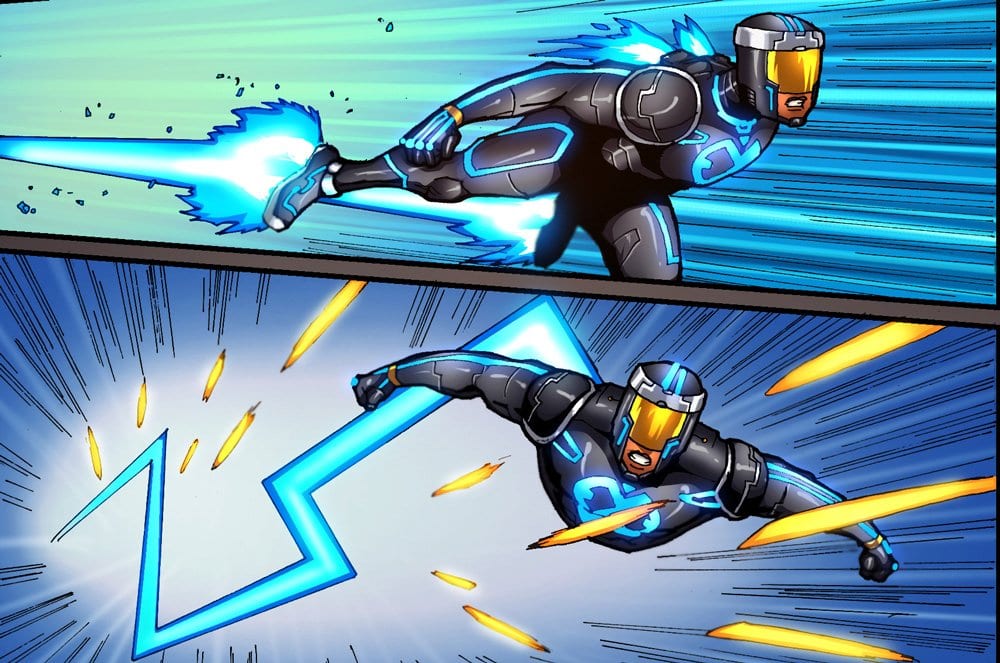 In today’s comic book industry the competition is several times greater than during the Golden age of comics (which was highly competitive still). The advent of globalization and the continuous advancement of university curriculum through out the world has ensured that more and more tolerance exists for contemporary art styles like those seen in comic books and computer animation within the tertiary education system . The internet has also made learning simple with the advent of online video tutorials and pod-casts in which you can listen in on professionals discussing the art-forms, trends and industry news. It is harder than ever now to penetrate the market as a mainstream artist or artists creator regardless of the amount of talent you have. Competition for work or success in making a break-out indie comic book title has also increased while the market or demand for artists is slowing down or remaining the same size. This situation though daunting has also presented a new avenue to create a profession and an independent career for yourself or for your intellectual property. This state of affairs has created a situation where one can either pursue a career under a comic book publisher or publish independently

The first question that many will ask is how possible is it to garner international acclaim or an international audience while working independently? The examples of such successful indie artists are on the rise. Leasean Thomas who is currently working on producing the pilot episode of Canon Busters which is his self owned title, has to be one of the best examples of an independent artist who is converting the success of of his self owned comic book of the same name into an anime. His effort to raise money through crowd funding on Kickstarter is one great example of the power of an individual building his audience organically and converting it to monetary support for a project they love. Canon Busters received more than a 100% of its intended goal in funding milestones in under 2 months. Similar examples of comic books or graphic novels funded by its fans include Youneek Studios which launched a similar campaign to fund the creation of E.X.O. the Legend of Wale Williams. The kickstarter campaign landed Youneek studios so much publicity that renowned websites such as Forbes and Mashable featured the project and brought the individually owned project to a point at which the whole world was exposed to it.

Another example of online success through online publishing which is my favorite on going indie graphic novel (and I hope will run indefinitely )Dresden Codak . According to online sources “On February 25th, 2013, Aaron Diaz launched a Kickstarter campaign to raise funds for a hard cover book edition of the webcomic. Dubbed The Tomorrow Girl: Dresden Codak Volume 1, it collected the first 5 years of the webcomic plus additional art and reformatted everything to fit printed media. The campaign reached its original goal of $30,000 in less than 24 hours and ended with a total of $534,994 ”

One thing must be noted when looking at these examples. The internet or the decision to go indie does not negate hard work. If anything you have to work just as hard as employed artists and in many cases risk financial and social losses by initially investing (as well as risking) your own time and money into the project in order to get the public to first sample it and then eventually support it by way of subscribing and then later supporting it . This process can take years and the risks are very high.

Alternatively one can pursue a traditional approach and submit his or her portfolio along with the thousands of other applicants directly to the publishers either with the hope of being assigned to draw a good title or in some cases be assigned a less popular title with room to raise to the ranks depending on how the readership responds to your interpretation of the source material. Once again this requires a lot of hard-work and understanding of the demands, requirements and standards to the publishing house that you will be applying to work for. This route without a doubt will require you to have a certain level of education and in some cases some experience of prior work . This makes the possibilities of success steeper than those of self published work but with success the benefits will include support from the publishing company, a steady income and in some cases health benefits and insurance which you would not necessarily be entitled to as an indie publisher.