Superhero Powers: Batman vs Superman, Cap vs Ironman. This is How We Know Who Will Win 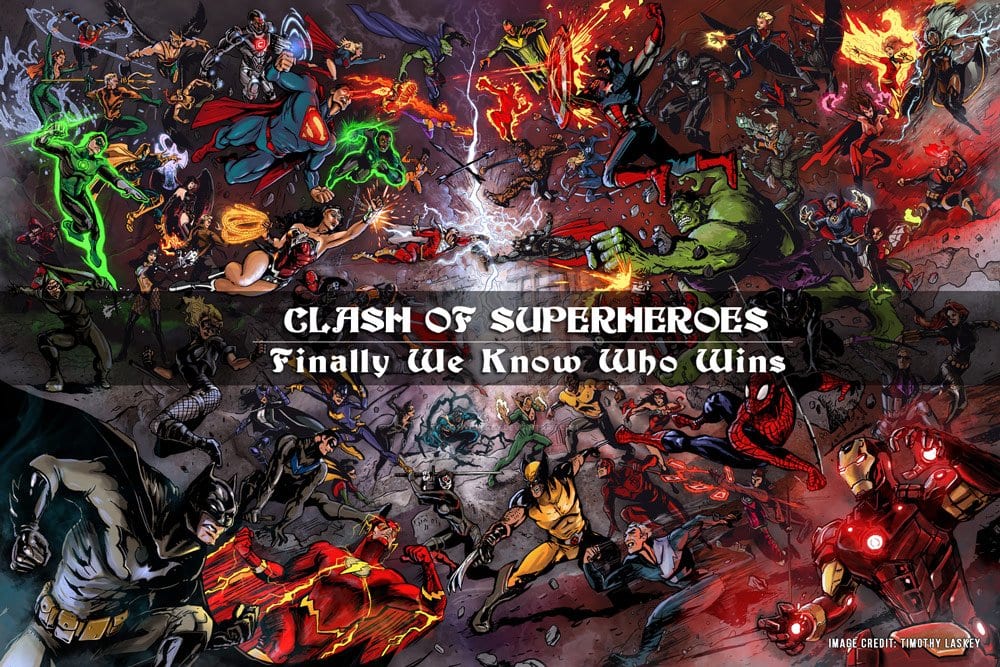 Superheroes–we all love them and want to be them. Okay, maybe not all of us but you get the point. Since the inception of the genre in the late 30’s, there have been endless debates about who would win when superhero powers clash. Batman vs Superman, Flash vs Arrow, Hulk vs Thor, heck the new Captain America Civil war movie (May 2016) will probably feature a battle royal of superhero powers. Social media has helped exacerbate these debates of superhero powers clashing, with hundreds of YouTube videos, tweets, and forums with people giving their various opinions. Well, I have come up with a way to end (more like fuel) these debates. Putting together a list of attributes and assigning varying weights (all of which add up to 100) to each, I came up with something called the SuperHero Rating (SHR). SHR is a simple, straightforward way of calculating a superhero’s (and supervillain’s) rating/level. Each attribute is further divided into a list of sub-attributes (measured on a scale of 1 – 10). The sub-attributes are summed up (with a formula I will explain later) to give a total for the main attribute. Still with me? If you don’t care about the breakdown you can simply access the custom calculator (rate your own characters or currently existing ones) I created for SHR by clicking the button below:

One last thing to note, the ratings of heroes that require equipment/tech (a suit, armor, weapons, etc.) are calculated based on them wielding said accessories.

Please Note: This is version 1.0 and will more than likely be tweaked as I get feedback. 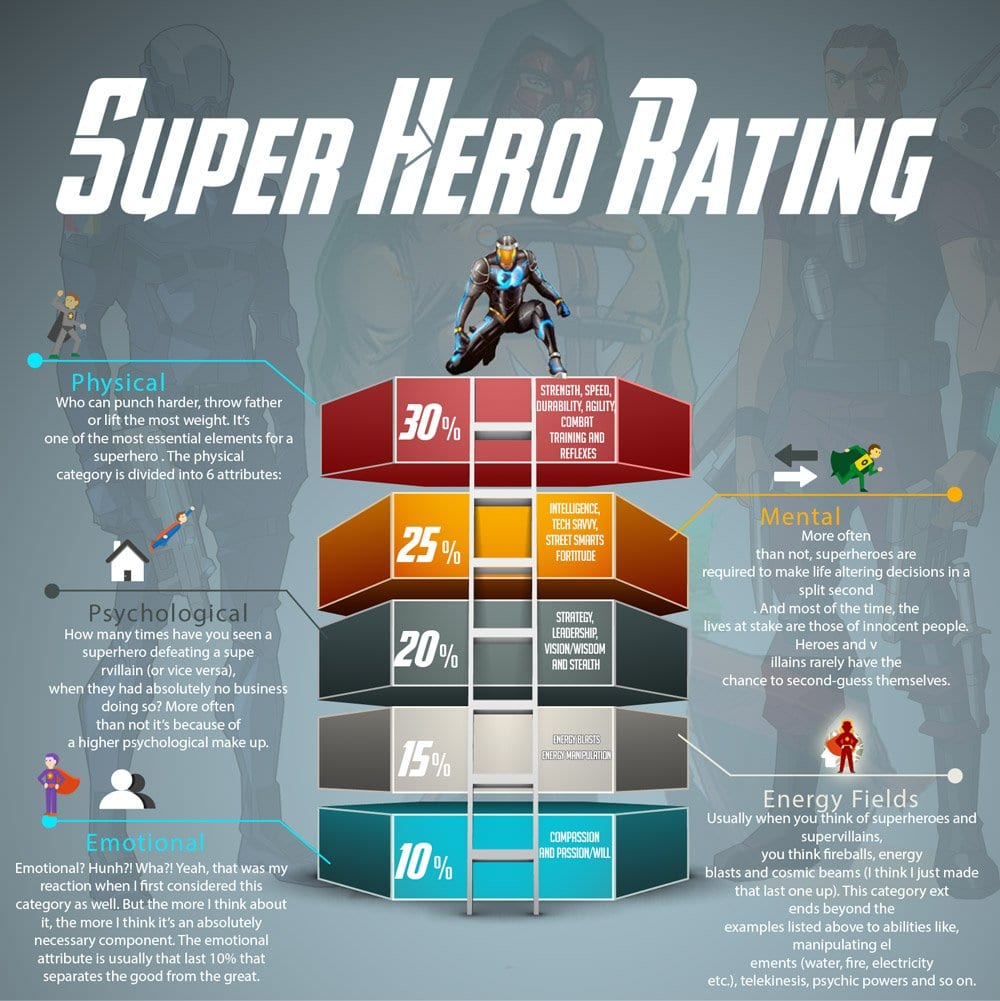 When it comes to superhero powers (and supervillains), the physical attributes are what come to mind first: Who can punch harder, run faster or lift the most weight. It is one of the most essential elements for a superhero and frequently the reason we add the qualifier “super” to the word hero. Accordingly, I made these features literally carry the most weight because I believe it’s arguably the most important attribute. The physical attribute is divided into these sub-attributes: Strength, Speed, Durability, Combat Training and Reflexes.

The mental makeup of a superhero or supervillain is critical. More often than not, these characters are required to make life-altering decisions in a split second. And most of the time, the lives at stake are those of innocent people. Heroes rarely have the chance to second-guess themselves. While not readily conspicuous, it is an incredibly valuable and often underestimated asset when it comes to superhero powers. This attribute accounts for 25% of the total and is split into these sub-attributes: Intelligence, Street Smarts (Cunning), Tech Savvy, Fortitude (Mental Toughness).

How many times have you seen a superhero who has no business defeating a supervillain (or vice versa)? More often than not it’s because of a higher psychological make up. It is ranked third in terms of weight, but is crucial for characters with low physical ratings. (As a side note, I’m considering merging this with the mental attribute, but I think for now it should stand on it’s own). The Psychological attribute is divided into: Strategy, Leadership, Wisdom and Stealth.

More often that not, when you think of superhero powers, you think fireballs, energy blasts and cosmic beams. I created this attribute to describe such capabilities. However, it extends beyond the examples listed above, so abilities like manipulating the elements (water, fire, earth etc.), telekinesis, psychic powers, teleporting and so on count as well. The Energy Fields attribute counts for 15% and it’s split into: Energy Blasts and Energy Manipulation.

Emotional? Hunh?! Wha?! Yeah, that was my reaction when I first considered this category as well. But the more I think about it, the more I think it’s an absolutely necessary component. The emotional attribute is usually that last 10% that separates the good from the great. Quick note: this attribute is not solely for good guys. It’s made up of two sub attributes: Compassion and Passion/Will.

In order to illustrate this (For those interested) let’s break down one of my own superhero characters (I’m not trying to get trolled by rating superman right now), EXO from the graphic novel: E.X.O. – The Legend of Wale Williams. Again, ff you’re not interested in the math, you can go directly to the superhero powers calculator I created for SHR and have fun/play around with it (disclaimer, it’s beta so it might be a little clunky). You can or rate your favorite characters and/or measure your own created heroes using the sliders.

Breakdown using the physical attribute as an example:

You can try out the custom calculator (rate your own characters or currently existing ones) I created for SHR and superhero powers by clicking the button below:

I’m considering adding multipliers to justify why I believe a higher SHR or greater physical & energy manipulating abilities doesn’t necessarily mean victory. This is why Wolverine can battle the Hulk and why Batman can hold his own against superman.

If a character gets the total number of points in one category (eg. 25 out of 25 for mental) they get a 1.2x multiplier. I call this the “Batman rule”. Because I personally feel Batman would get perfect scores for the Mental & Physiological attributes. So instead of scoring 25 & 20 respectively he would get 30 for Mental (25 x 1.2) and 24 for Psychological (20 x 1.2).

This works especially for (but not limited to) characters that manipulate the elements (air, water, fire). Imagine the Human Torch fighting Aquaman in the middle of the Atlantic Ocean. It would be no contest. Aquaman wins. Not necessarily because he’s stronger or better, but because of the environmental advantage. Another example would be a character with a high ranked stealth power fighting at night, receiving a temporary multiplier (1.2x ) if they fight at night as opposed to during the day. There are also negative terrain multipliers e.g. Superman fighting close to Krytonite, Martian Manhunter fighting a character with fire manipulation abilities.

So what do you guys think? Does it make sense? Is it total crap? Let me know in the comments section. I would really appreciate your feedback 🙂