Over confident, reckless and impatient; These are some of the words that describe this “hero in the making”. Wale’s genius makes him audacious, which more than often leads him into dangerous situations. However, throughout his journey, his bravery, selflessness and strong will show why his true calling is to be a hero. Wale was born and raised in Lagoon City, Nigeria, but fled the country after a tragedy involving his father’s work. This changes Wale’s life forever as his incredible love for his father slowly turns to disdain.

Five years later, Wale returns home due to his father’s “mysterious disappearance” were he finds a Prototype Nanosuit left behind for him. A suit that grants him the ability to manipulate force fields. With his new found motivation to save his city, the E.X.O. suit gives birth to Wale’s alter ego “EXO”, as he tries to defend the city against the sociopathic Oniku. Leader of an extremist group called The CREED. 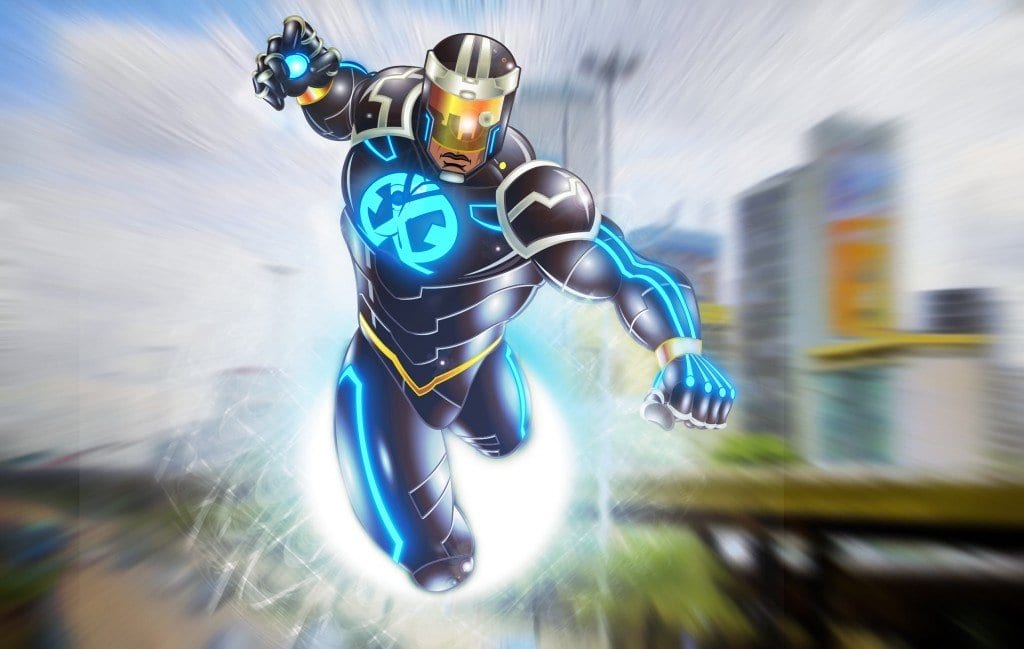 After having nanites injected into his bloodstream by his father, Wale developed improved reflexes and a heightened use of all five senses. The nanites also act as a power source for the E.X.O. suit granting him super strength, flight capabilities, plus the ability to generate and manipulate Force Fields. Due to the regenerative nature of XION (which the nanites are constructed from), Wale also heals faster than regular human beings.

Wale has always been a genius with computers and technology ever since birth, his supreme understanding of technology, computers and their hardware always gives him an advantage in situations surrounding them. While he has both an undergrad degree in computer engineering and a masters in computer science, he lacks the scientific expertise necessary to modify his E.X.O. suit. While not a genius level inventor/scientist like his father he is a capable engineer and a gifted problem solver.

After being constantly bullied at the age of five, Wale requested his father put him in school for karate lessons. He then went on to become a 2nd degree black belt in two years, becoming a child prodigy. Following his departure from Lagoon City, Wale continued his karate training whilst adding other forms of combat training (such as mixed martial arts Brazilian jiu jitsu). Five years later, he would go on to become a 5th degree karate black belt. Mastering karate and adding secondary martial arts techniques has made him formidable in hand-to-hand combat with a unique blend of acrobatics and striking whether he is inside or out of the E.X.O. suit. Wale’s passion for training comes from his hatred of bullies and the willingness to defend himself and others from all types of oppression.

In the case of underwater dives and space exploration, there is a hidden mouth plate that merges with the visor to create an internal air supply and filtration system that can last for up to one hour.  The suit is also equipped with an artificial intelligence called G.A.I (Genomic Artificial Intelligence), which possesses partial genetics and memories of Dr. Williams. G.A.I comes equipped with a radar, heat and motion detectors, an indications and satellite radio system that allows for audio and video connections.

Dr Williams, creator of the E.X.O. suit, composed it with 99% XION (Pronounced ZION). A unique and extremely rare element. XION has 10x the density of steel while being 1/3 as light and is almost as flexible as plastic. It also has an uncommon characteristic called inorganic renewal, which allows its molecules to regenerate after being damaged.