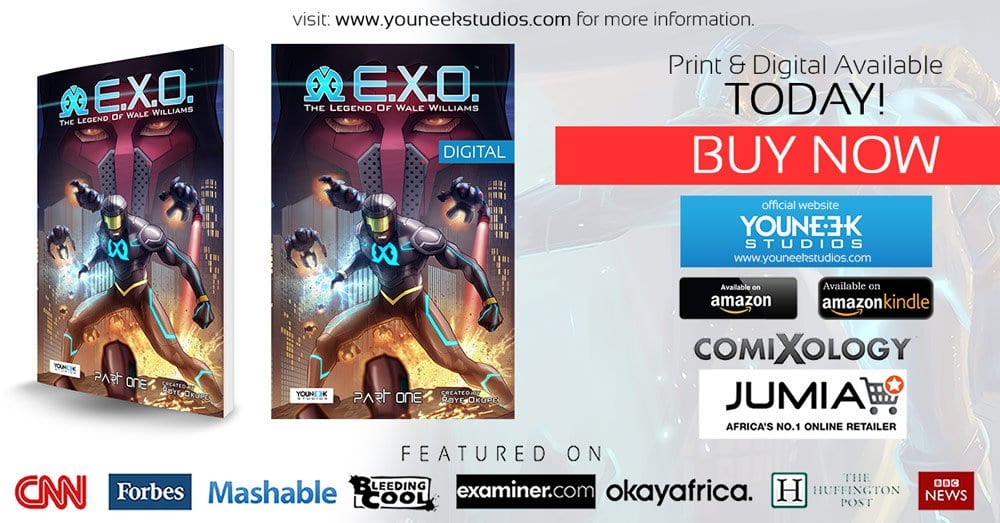 YouNeek Studios, the Maryland based transmedia company, is proud to bring the graphic novel, E.X.O. – The Legend of Wale Williams Part One to their fans. The Graphic Novel will be the first volume in the E.X.O. series of books, with The Legend of Wale Williams     being split into two parts. Part one will be a 136-page book and is out now! Follow this link to buy today.

As a gift to their fans, YouNeek Studios has made the first chapter (all 22 pages) available for free online. You can read it now by clicking here.

Featured on CNN, FORBES, BBC and more, E.X.O. – The Legend of Wale Williams Part One is a superhero story about redemption, set in a futuristic, 2025 Africa! The 136 page graphic novel follows the journey of Wale Williams; an impetuous young man who inherits a suit with super powers after his father goes missing. Tricked into returning home to Lagoon City, Nigeria following a five-year absence, Wale embarks on a journey to investigate his father’s mysterious disappearance. As he comes to understand the suit’s powers, Wale realizes he must restore hope to his city by preventing catastrophic attacks from the sociopathic, Oniku, leader of an extremist group called The CREED.

E.X.O. was created and conceived by Roye Okupe, a writer with a background in film and animation.

Beyond the graphic novel trilogy, YouNeek Studios has plans to release E.X.O. as an animated feature sometime in the future. In a time were the public is demanding a more diverse slate of superhero comics and movies, YouNeek Studios aims to fill that gap with a library of eclectic characters.

“I started E.X.O. for two main reasons. First of which was to finally step out and take a risk to make my dream come true. I’ve always had a dream to create a superhero from Nigeria where I was born and raised. The second reason was pride. I wanted to do something positive and inspiration for my country (Nigeria) and my continent Africa. When people see E.X.O. either animated on screen or read as a graphic novel, I want them to see a different side of Africa (our booming tech industry, amazing city architecture, unique culture, African humor, Afrofuturism etc.), a side that is not regularly shown in mainstream media.”

Born in Lagos, Nigeria, Roye Okupe is a veteran creative specialist who holds both a Bachelor’s and Master’s in computer science from The George Washington University. His passion for animation led him to found YouNeek Studios in 2012, an avenue that would allow him pursue his dream of creating a diverse library of superheroes.