A New And YouNeek Superhero YouNiverse 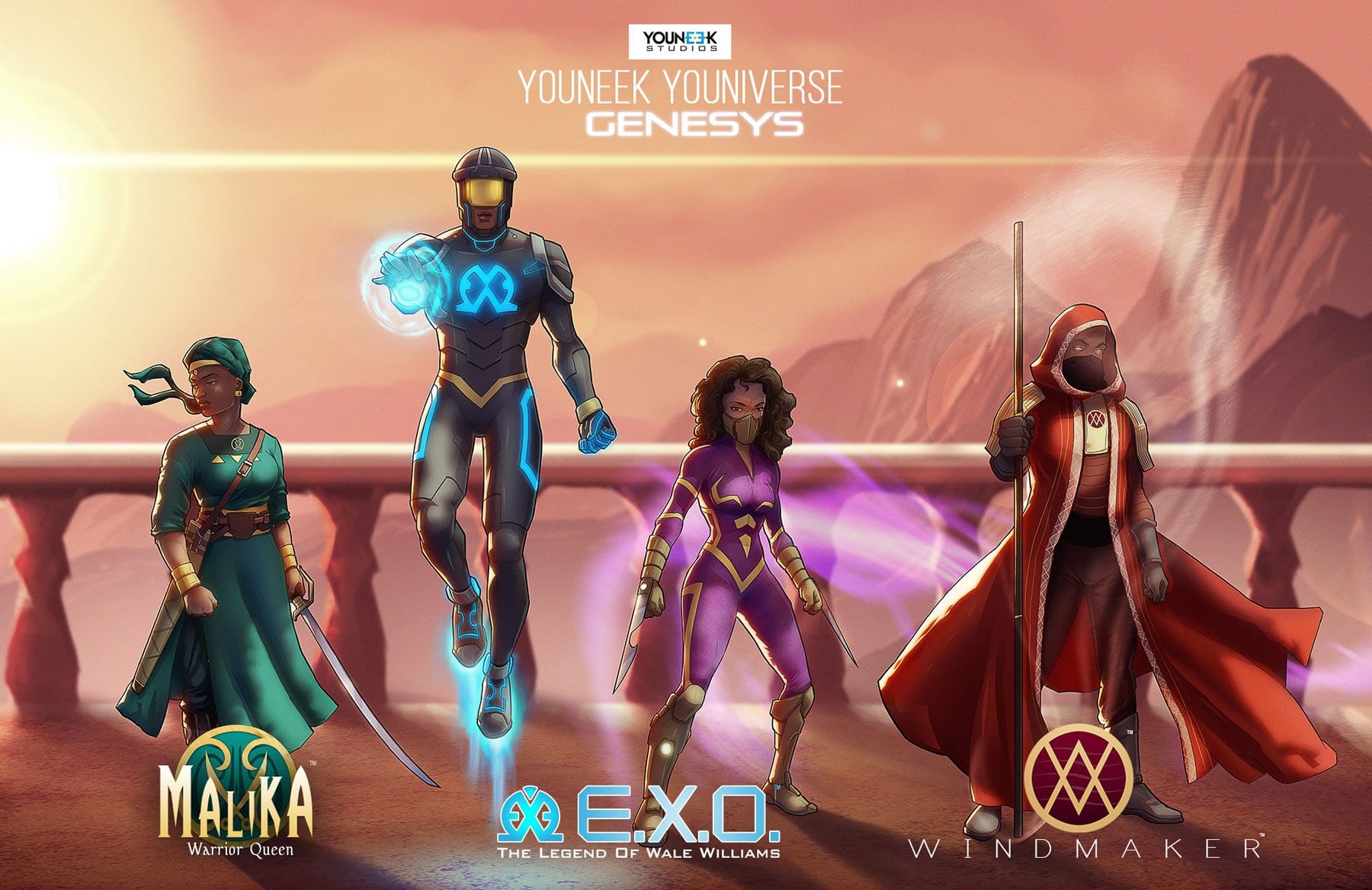 YouNeek Studios, the Maryland based transmedia company, is proud to announce their third title, Malika: Warrior Queen will be the newest addition to the YouNeek YouNiverse this upcoming May.

Coming off the hit graphic novel: E.X.O. The Legend of Wale Williams (Parts One & Two), which was featured on CNN, Forbes, The New York Times, The Washington Post and more, Malika will be the third book in the continuity of a shared universe of graphic novels called the “YouNeek Youniverse.” Dubbed “The MCU of graphic novels,” the YouNeek YouNiverse is a combination of individual graphic novel series (E.X.O., Malika, WindMaker etc.) tied together with one continuous, overall plot that weaves through each individual story. 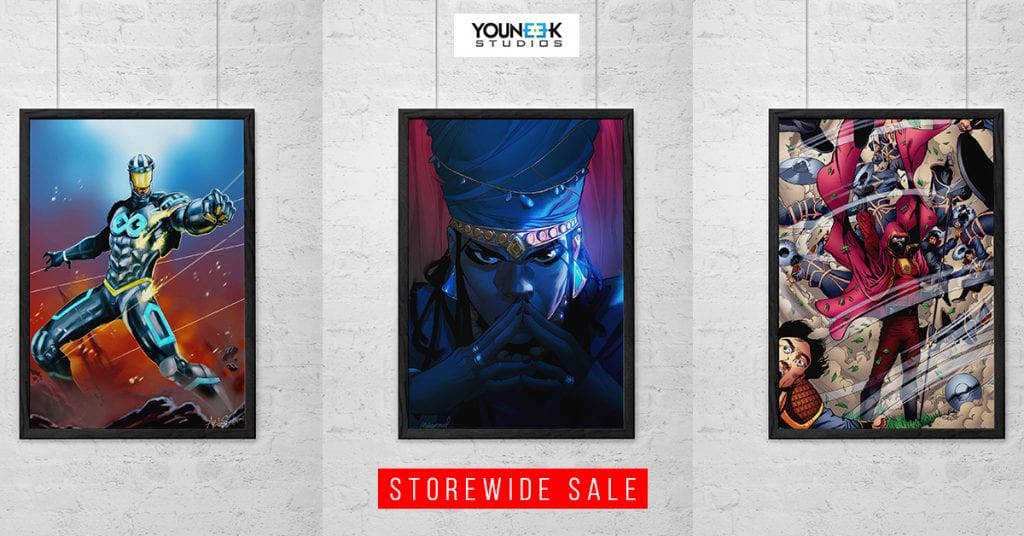 Check out our store for some amazing superhero merchandise and books

“We want to make it easy for anyone to get into comic book stories, which at the end of the day are just, well… ‘Stories.’ One of the inspirations behind the YouNiverse comes from something I see Marvel Studios doing very successfully with their movies. Marvel has masterfully crafted a system of connected movies (collectively called the Marvel Cinematic Universe or “MCU”) that has attracted millions of casual, everyday fans that have never read a single comic book!” – Roye Okupe, Co-Founder/CEO

This May, during Free Comic Book Day, readers will get a chance to read the first chapter of Malika free! By late May/Early June, they will be able to purchase the full graphic novel (chapters 1-6). If you can’t wait, you can preorder the graphic novel now. E.X.O. part one/two, the previous installments in the YouNeek YouNiverse are available for order now (links below). 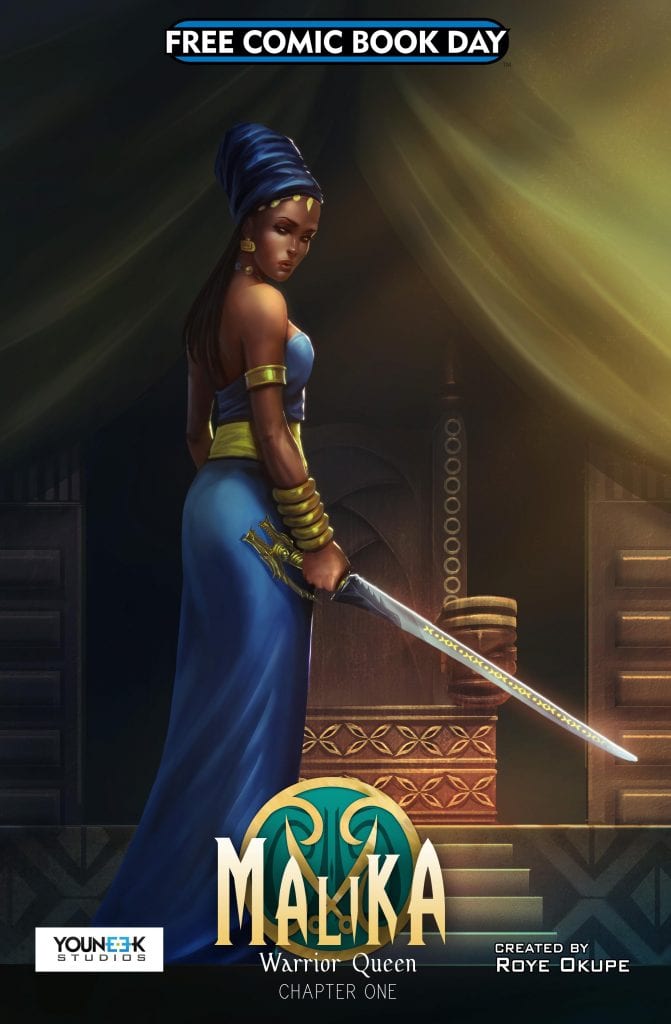 Set in fifteenth century West Africa, Malika: Warrior Queen follows the exploits of Queen and military commander Malika, who struggles to keep the peace in her ever-expanding empire. Growing up as a prodigy, Malika inherited the crown from her father in the most unusual of circumstances, splitting the kingdom of Azzaz in half. After years of civil war, Malika was able to unite all of Azzaz, expanding it into one of the largest empires in all of West Africa. But expansion would not come without its costs. Enemies begin to rise within her council and Azzaz has grabbed the attention of one of the most feared superpowers the world has ever known: The Ming Dynasty. As Malika fights to win the clandestine war within the walls of her empire, she must now turn her attentions to an indomitable and treacherous foe with plans to vanquish her entire people.

Born in Lagos, Nigeria, Roye Okupe is a creative specialist who holds both a Bachelor’s and Master’s in computer science from The George Washington University. His passion for animation led him to found YouNeek Studios in 2012, an avenue that would allow him pursue his dream of creating a diverse library of superheroes. Under that umbrella, Roye wrote, produced and directed several animated productions including, but not limited to, 2D/3D animated short films, TV commercials, show openers, music videos and much more. These productions have allowed Roye to attain much prestigious recognition such as being #5 on Ventures Africa’s list of 40 African innovators to watch.

With the superhero genre currently at the height of popularity, Roye has made it a goal to create a connected universe of heroes, with origins from locations that are currently neglected and/or ignored. In August 2015, Roye released his debut graphic novel titled: E.X.O. The Legend of Wale Williams Part One, a superhero story set in a futuristic Nigeria. E.X.O. was received with critical acclaim and has since been featured on CNN, Forbes, The New York Times, NBC, The Guardian, ABC7, BBC, The Huffington Post, The Washington Post, Mashabe and more!

To order our books and merchandise go to: http://youneekstudios.com/store/ (Also available on Amazon, Comixology & iBooks)

For more about Malika (or to preorder) go to: http://youneekstudios.com/preview/exo-preview.pdf

For more about the YouNeek Youniverse go to: http://youneekstudios.com/genesys/

For more about FCBD go to: http://www.freecomicbookday.com

Requests for interviews can be sent to info@youneekstudios.com