To educate/entertain the world about/with African history and culture, thereby elevating the continent above known stereotypes.

Simply put, through the use of comics, animation, video games and other forms of media, we focus on telling extraordinary stories about extraordinary characters inspired African history and culture.

To create stories and characters that inspire everyone.

Subscribe for Updates & to Read 100+ Pages of Comics FREE!

“From the first day I laid my eyes on the Teenage Mutant Ninja Turtles cartoons in the ’80s, I’ve been hooked on superheroes. Since then, I’ve watched, played and read every single superhero-related title I could lay my hands on movies, digital comics, manga, anime, graphic novels, comic books, superhero books, animated movies/series, video games and beyond. And then in 2008, after noticing there wasn’t a lot of diversity in the genre, I decided to tell a story about a hero from Nigeria. Hopefully, E.X.O. fulfills my goal of adding something unique to the industry”
– Roye Okupe, Owner/Creative Director at YouNeek Studios 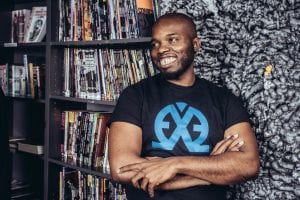 You can learn more about Roye on his website

The Rise of Digital Comics

Everyone loves the look, feel and smell of a minty new comic book fresh out of the store: Your fingers running over the glossy stock paper as you turn from page to page, staring at your hero while the visuals jump right off the page. For us, at least, there is no better feeling. In our opinion, print is here to stay. However, ignoring the rise of digital comics would be silly. With the emergence of Amazon’s Kindle platform and the rise of sites like Comixology, the comic book and graphic novel industry has opened itself to a slew of new consumers. Digital comic sales are going through the roof, and the format is an important part of the current media landscape.

To see our library of digital comics, please click here.

Originally, we had the vision to release all our stories as animated movies. The superhero genre has its roots in comic books and graphic novels, and we felt we were skipping a crucial step. We decided to go back to the drawing board, starting from the ground up, both to build a fan base and to allow people to connect with our characters on a much deeper level, something we believe can only be achieved by releasing our stories as books first.

However, we still have goals of eventually releasing our IP as animated (and eventually live action) feature films and TV series. The long term goal is for the “YouNeek YouNiverse” to become a home for transmedia storytelling.